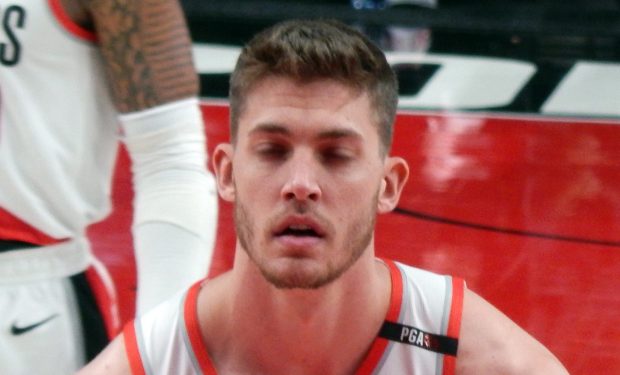 Meyers Leonard is the 7-foot-tall power forward playing with the Miami Heat. He played college basketball at Illinois for two years before he was selected by the Portland Trail Blazers in the 2012 NBA Draft. After seven seasons with the Trail Blazers, Leonard was traded to the Heat in July 2019.

When not on the court, he spends time with his gorgeous wife and college sweetheart, Elle Leonard, who looks amazing in a bikini. Elle has game too: although she didn’t play basketball at the Big Ten school she did play in high school and has been showing off her shot in Instagram videos (see below).

The Los Angeles Lakers vs. Miami Heat game will broadcast live from American Airlines Arena on Friday, December 13 at 8 pm on ESPN. [NOTE: Get the ESPN digital app and watch any show. It’s free to download.]