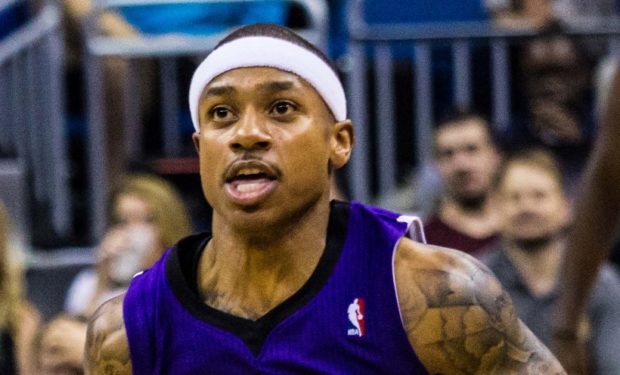 Allen Iverson loves the players who haven’t yet taken their bite yet of the championship metal — hes always rooting for another good guy to get a taste. And when the NBA legend gave the interview below to Michael Rappaport, he was on the IT train, as in Isaiah Thomas, the 2x NBA All-Star and current Washington Wizards guard.

At the time Thomas looked poised to be a lifelong Boston Celtic, with a chance to put a banner in the rafters. But life and the NBA keep happening, and Thomas has been on at least four teams since then. He’s a damn killer on the court, btw. And DC is gonna eat up the IT game, just wait and see.

Iverson said he was rooting for Thomas because he loves his game. And maybe because he likes being the tall guy for once. Rappaport says to Iverson, at 6-feet often considered the best “little man” to ever lace ’em up, that he’s like a 7-footer next to Thomas.

Iverson answers that he calls Thomas, listed at a perhaps generous 5’9″, a “midget.” Iverson: “Yeah I always call him a midget. I mess with him. I tell him if we played against one another it would be so easy for me cause I would just shoot over top of him. Even with a hand up, I still wouldn’t be able to see his hand.” Damn, AI.

But Iverson is in awe of Thomas for real: “Man, the talent that he has and the heart,” says AI of Thomas, “man, you know what I mean? You can’t teach that.”