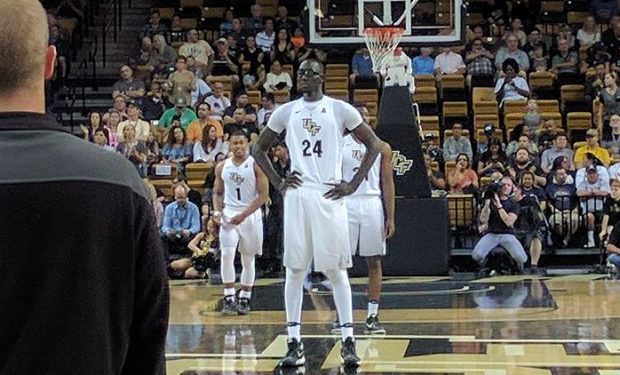 Tacko Fall is no lock to make the Boston Celtics final roster this year, despite towering above even his tallest competitors. He’ll have to earn it in training camp this fall — and those 15 Celtics roster spots are hotly contested and deeply coveted.

But if Fall finds himself even with another player for the final spot, it’s nearly certain the big fella gets the nod. He’s a physical wonder and a fan favorite — and he hasn’t even played an NBA game.

Fall is visiting his home country of Senegal as part of an NBA contingent representing Basketball Without Borders Africa, where he is helping train and coach promising youth talent on the continent — and getting some instruction himself. 76ers All-Star center Joel Embiid, a native of Cameroon, is on the trip too. Fall told the Boston Globe that Embiid has been generous to him with advice about the NBA life and life down on the block in NBA games.

Fall has also received advice from his “uncle” Dikembe Mutombo — 8x NBA All-Star and part of the great tradition of Georgetown centers that includes Alonzo Mourning and Patrick Ewing. Fall said Mutombo originally from the Democratic Republic of Congo) advised him on “how you need to behave and carry yourself throughout the NBA” — which means once Fall makes the Celtics, expect to see some finger-wagging after blocked shots.

The wag, of course, is Mutombo’s signature, and it represents how he carried himself in the NBA. Let’s go, Tacko! Everyone is rooting for him, it seems, despite Wilt Chamberlain‘s assertion that “nobody roots for Goliath.”