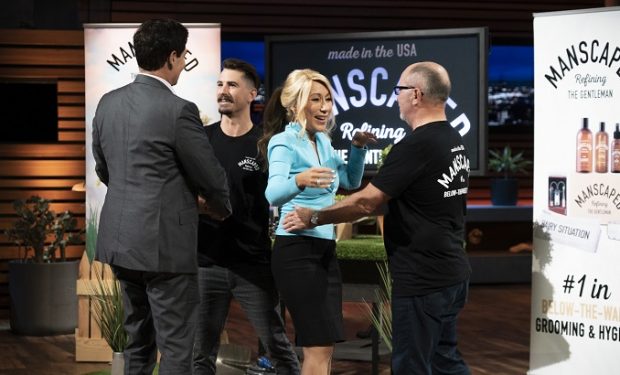 Manscaped is a line of grooming products for men to use for “below the waist” grooming and hygiene. Products include “The Lawn Mower” (an electric razor), “The Plow” (a single blade razor), and anti-chafing deodorant and antiperspirant, among other things. The two founders of Manscape, father-and-son duo Josh King and Steve King from Carlsbad, California, pitched their men’s grooming business on Shark Tank in October 2018.

[Manscaped products are on sale at Amazon]

The Kings went into the Tank seeking an investment of $500,000 in exchange for seven percent equity. Yes, that’s a $7.1 million valuation. Robert Herjavec who admitted to grooming below the waist during his Dancing with the Stars days, offered $500k for 35 percent but the Kings accepted a joint offer from the Queen of QVC Lori Greiner and billionaire Mark Cuban — $500k for 25 percent (a $2 million valuation).

After appearing on Shark Tank, Manscaped has arranged a strategic marketing collaboration with Slyde, the company that makes handboards for bodysurfing that Cuban and guest Shark Ashton Kutcher invested in in 2016. See hilarious co-branded video, “How to Reduce Bush Drag” below. But Manscaped has yet to appear on QVC! New episodes of Shark Tank air Sundays at 9 pm on ABC. [Related: 27 Favorite ‘Shark Tank’ Products at Amazon]