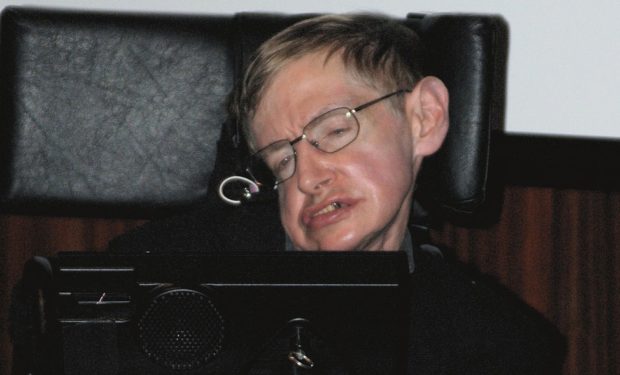 Today the world lost one of its greats. Born on January 8th, 1943 theoretical physicist Professor Stephen Hawking, CH, CBE, FRS, FRSA, died today at the age of 76. Diagnosed at the age of 21 with ALS or motor neurone disease (also commonly known as Lou Gehrig’s Disease), Hawking was a man of tremendous bravery and intellect who defied the odds and lived well beyond expectations both in years and achievements. Although eventually confined to a wheelchair, paralyzed by the debilitating disease, losing his voice as well, Hawking would overcome his physical challenges and become one of the greatest explorers that the world has ever known.

“One, remember to look up at the stars and not down at your feet. Two, never give up work. Work gives you meaning and purpose and life is empty without it. Three, if you are lucky enough to find love, remember it is there and don’t throw it away.” — Stephen Hawking

[Hawking’s most famous book: A Brief History of Time]

As a young boy Hawking displayed a boundless curiosity about how everything worked. He did not excel as a student early on, yet his classmates recognized in him a special genius referring to him as “Einstein”. His scholarly inclinations would take form later, graduating from Oxford and later Cambridge where his postgraduate thesis set out to prove that the universe had a definite beginning. Over the course of his career Hawking’s mind would journey across the furthest reaches of the universe back to the beginning of time. Hawking was perhaps best known in scientific circles for his work on the gravitational singularities of black holes and the revolutionary understanding that these were not as black as were once thought, discovering that you could escape from a black hole after all. His broader fame, that which made him a household name, derives from his enormously influential book A Brief History of Time (see link above), which sought to introduce to a wide audience key concepts of cosmology and sold over 10 million copies.