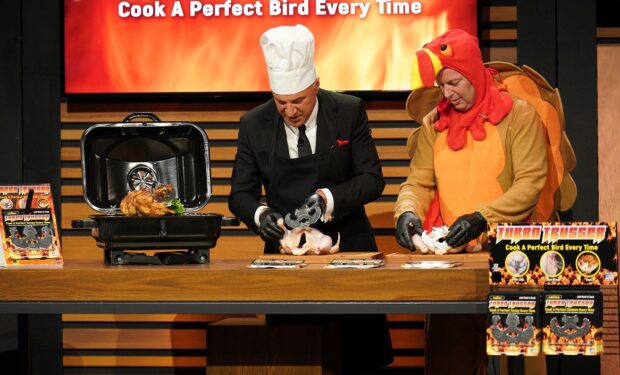 On Season 14 of Shark Tank, two entrepreneurs from Canton, Ohio walk into the Tank wearing a turkey (Kirk Hyust) and a chicken costume (Brian Halasinski). They hope to hook a Shark with their Turbo Trusser, a rapid trussing device designed to cook the perfect bird every time. (Trussing is the process of tying a bird’s wings and legs together before cooking.)

Hyust and Halasinski have the good fortune of pitching in front of Kevin “Mr. Wonderful” O’Leary who fancies himself a gourmet cook. As seen above, O’Leary participates in the Turbo Trusser demonstration, chef’s hat and all.

The stainless steel Turbo Trusser (which is proudly made in America) is safe to use in ovens, smokers, barbeque grills, rotisseries and deep fryers, and it’s dishwasher safe.

Turbo Trusser is getting 5-star reviews on Amazon, including: “Works like a charm, so much easier than tying the legs together and tucking the wings underneath. Plus they cook better because they’re not squeezing against the body of the chicken!!”