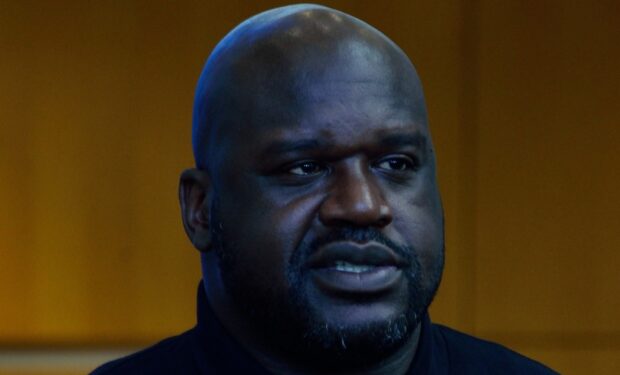 Do not call Shaq a celebrity! (Yes, Charles Barkley, that’s an invitation to do just that!) Anyway, the “celebrity” designation makes Shaq mad. And if you threaten him with “celebrity” — or any “C” word for that matter — he might just knock your teeth out. And though he is a friendly giant, Shaq pantomimes what he would look like with his teeth knocked out and it’s both hilarious and at the same time terrifying!

At about the 50-second mark in the video below, Shaq starts smacking his lips and showing what he’d look like without teeth. Warning: you may never forget it! (Shaq is such a versatile actor! He plays the heavy here just as well as he plays the goofy charmer elsewhere.)

Shaq challenges his former Blue Chips co-star Anthony Hall to “Say it one more time” — and the big fella clearly relishes challenging him to do it.

It’s a glimpse of what it must have felt like to play basketball against the NBA superstar: imagine Shaq saying “bring that into the lane one more time and I’ll knock your teeth out.” (Not that Shaq ever said anything like that to an NBA opponent…)

Now of course Shaq has plenty of teeth — a situation which helps his inimitable Hall of Fame smile. Here’s another video where Shaq, co-starring with a 17-footer, is doing some pure mouth acting! He’s on a roll. But this time, no hiding of teeth!

And if you can’t get enough of Shaq’s smile, this is mint video right here: