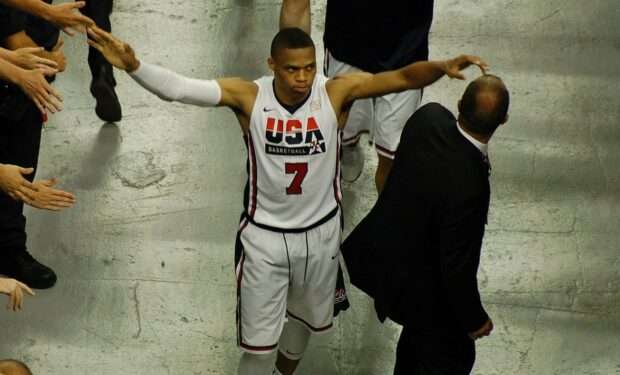 At the premiere of his documentary “Passion Play” — and their couldn’t be a better title, Russ plays FOR KEEPS — the icon and iconoclast wore some exceptionally fantastically exceptionally BIG PANTS! And of course, now we want some. Like everybody else.

It put some people in the mood for an M.C. Hammer revival. Because nothing says big genie pants like “Can’t Touch This” right? Yeah but Russ’s big pants are way different than Hammer’s. It’s Russ time not Hammer time now.

Fans took notice. “Those pants bruh” writes one fan and another says “he got snow pants on!” But there’s no snow in LA, just style and Russ has an abundance of it. He was wearing a skirt in NYC not long ago, and making it work just like he works on the court. Emphatically!

Anyway the pants on Russ are sometimes the opposite of roomy. Sometimes they cling and have a sense of bling to ’em too. Purple is a fave color for sure nowadays.

Catch Russ in all his glory in “Passion Play” on Friday October 15th at 9PM ET on Showtime! There will definitely be an element of “can’t touch this” to Russ’s passionate story.