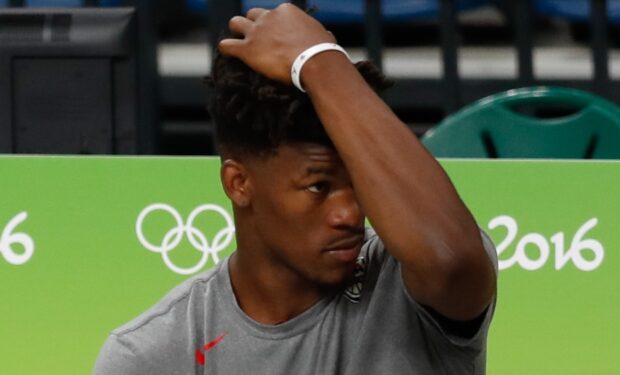 NBA superstar Jimmy Butler is ready for the NBA season. Two years after leading his Miami Heat to the NBA Finals in the Orlando bubble, Butler plans to continue to crush the competition with his Heat elite, like fellow NBA All-Star Bam Adebayo and rising star Tyler Herro.

Don’t believe Butler’s ready? Swipe to photo #3 below — that’s the high quality growl/sneer his opponents will see. But this photo series is really ALL ABOUT THE BRAIDS.

Butler captions the post: “It’s called a before and after. Don’t worry about the hoodie.” Butler boards a private jet and gets his braids done there because, you know, he’s an NBA superstar! The fourth pic — after the awesome sneer — is the big reveal, and fans love it. Butler puts on a red bandana (headband style) and fans are seeing some serious Allen Iverson action! “Jimmy looking like A.I.” says one fan of both NBA legends.

Maybe it’s because the bandana’s red — SIXERS colors. Here’s Iverson, happy on the court in braids and red head gear.

For those who can’t wait for the Heat and the NBA to kick off. The aforementioned BAM ADEBAYO is also READY, as you can see.