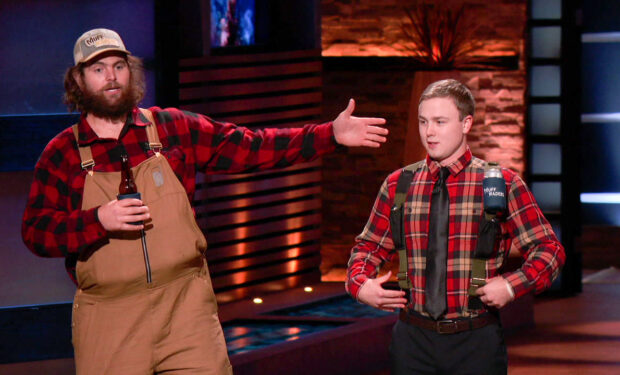 On Season 12 of Shark Tank, two Iowa entrepreneurs — Taylor Ness (aka Earl; the tall bearded one in overalls) and Garret Lamp (aka Buddy; the clean-shaven one in a suit) — “get the party going” when they introduce their innovative apparel, Muff Waders.

Their overalls (aka bibs) are designed with a built-in insulated pocket that can hold and keep up to 6 cans of drinks cool while keeping your hands free to do “manly” chores including chop wood. The brand tagline is: Manly + Tuff – Muff. There’s also a zippered “concealed” pocket inside the overalls for “valuable items that some people might judge you for having.”

When “Earl” demonstrates the extra cargo pockets to hold beers, he yells “Bingo!” which makes everyone including Mark Cuban crack up.

The two Iowans go into the Tank seeking an investment of $25,000 in exchange for 25 percent equity. And Cuban is a good contender: he’s invested in beer cooling products before including Kanga Coolers and Beer Blizzard ice cubes. Cuban has also invested in other designated “manly” products including Dude Wipes and Manscaped.