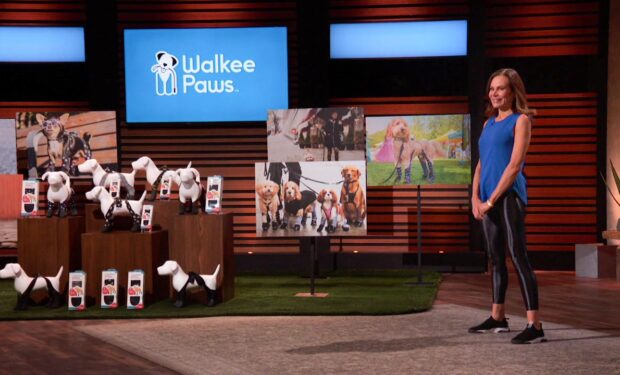 On Season 12 of Shark Tank, New York City entrepreneur Lisa Baronoff pitches her pet product Walkee Paws, which are being promoted as The World’s First Dog Leggings. The hybrid dog shoes-boots-socks protect your pet’s paws from the wet ground in rain and snow and protect your house from dirt and germs that dogs tend to track into the house.

The rubber grippies on the bottom of Walkee Paws also help older dogs from slipping on indoor wooden floors and tiles. They’re machine washable and available in a number of fun patterns including camo and cocoa.

Expect Lisa to keep an eye on Lori Greiner, the Shark who invested $250,000 in Shed Defenders, the dog onesies that keep pet hair and dander from shedding all over your house.

But don’t count out billionaire Mark Cuban: he invested $250,000 in Dog Threads, the company that makes matching Hawaiian shirts for pets and owners.