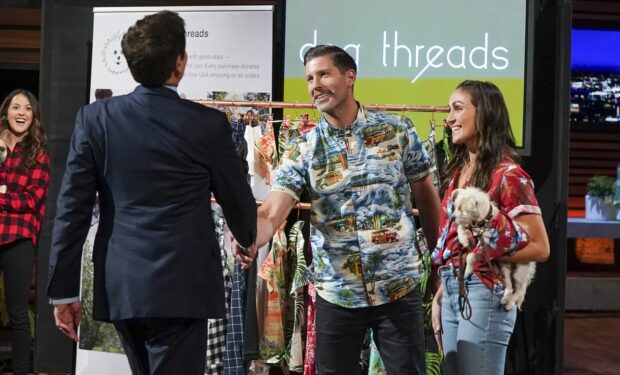 And yes, you can buy a matching Hawaiian print shirt for yourself so you can twin with your pup.

More good news: a portion of every Dog Threads sale goes to a non-profit animal rescue near their Davis’s home in Minnesota.

Scott and Gina went into the Tank seeking an investment of $250,000 in exchange for 17 percent equity.

After NBA Dallas Mavericks owner Mark Cuban offered $250,000 for 30 percent (and mentioned helping them get an NBA licensing deal), Scott and Gina reminded Cuban of their one-year-old at home (and even showed him a picture) so Cuban agreed to 25 percent. Watch the clip below.

The Dog Threads Shark Tank episode originally aired in November 2019. Since then, the brand continues to release cute new Hawaiian prints... and Gina is pregnant with their second baby. See cute fam photo below.