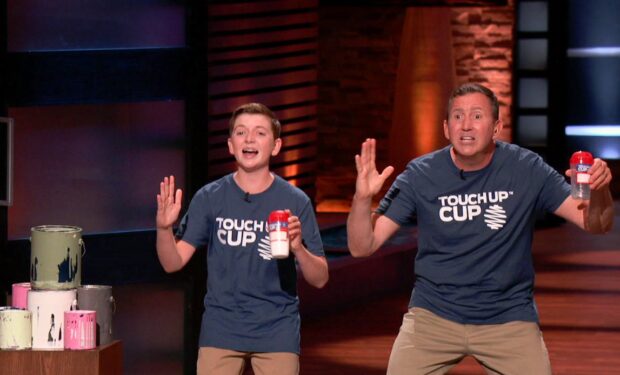 Touch Up Cup is a container designed specifically for small touch-up paint projects. Not only does it keep paint fresh for years and free of rust clumps but it’s also ready at the quick for rapid paint mixing and using. “Just shake ‘n paint” is the company tagline.

The two entrepreneurs behind the home care product, father and 15-year-old son Jason Grill and Carson Grill, pitched Touch Up Cup on the Season 12 premiere episode of Shark Tank.

They went into the Tank seeking an investment of $150,000 in exchange for ten percent equity. They left with a deal with guest Shark, TOMS Shoes founder Blake Mycoskie: $150,000 for 17.5 percent.

The episode originally aired in October 2020. Since then, Touch Up Cup continues to receive stellar 5-star reviews including: “I don’t even need stir sticks, just a few shakes and it’s ready. Great product.” It’s also available at Lowe’s and Home Depot, among other hardware store.

In December 2020, Jason Grill announced that Touch Up Cup is working on a private label partnership with painter’s tape brand Frog Tape and is projecting to top $2 million in sales in 2021.