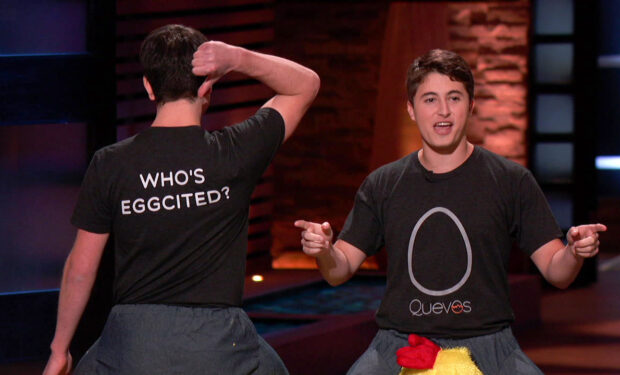 On Season 12 of Shark Tank, two entrepreneurs from Chicago, Nick Hamburger and Zack Shreier, pitch their “egg-citing” take on a traditional snack food Quevos. It’s a low carb, high protein chip made from egg whites and comes in a variety of flavors including Sour Cream & Onion, Rancheros and Dill Pickle.

Nick and Zack make the Sharks smile when they walk into the Tank wearing chicken pants (pants that make it look like they are standing on the shoulders of chickens (see photo above).

The two young women have the good fortune of pitching in front of guest Shark Daniel Lubetzsky, founder of KIND Snacks, who knows a thing or two about selling healthy snacks and who smiles during the Quevos Shark Tank pitch as seen below.