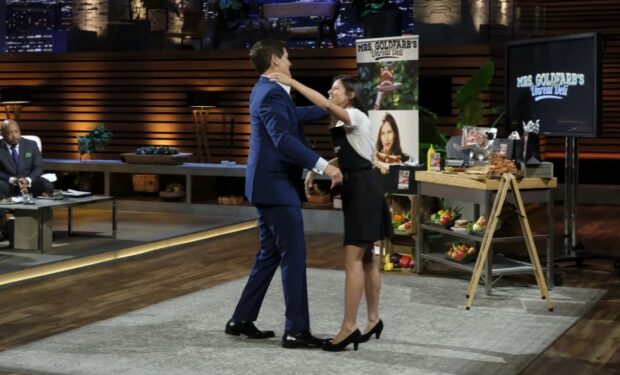 Jenny Hanna Goldfarb is the founder of Mrs. Goldfarb’s Unreal Deli, a vegan twist on corned beef. She grew up in New York City where her great grandfather (Morris Gross) owned several delis and where Jenny consumed a lot of corned beef sandwiches.

When she became an adult and followed a vegan diet, she still missed the taste so she created her own plant-based recipe with organic beets, chickpeas, and tomatoes.

She went into the Tank seeking an investment of $100,000 in exchange for ten percent equity. She accepted vegetarian Mark Cuban’s offer: $250,000 for 20 percent.

This Shark Tank episode originally aired in November 2019. Since then, Mrs. Goldfarb’s Unreal Deli continues to get 5-star reviews on Amazon including “You need to eat it to believe it!”

The brand — which underwent an impressive makeover, see photos below — continues to expand retail distribution to grocery stores including Whole Foods and restaurants including Cali Fresh Mexican Grill and in a number of Quiznos retail stores.