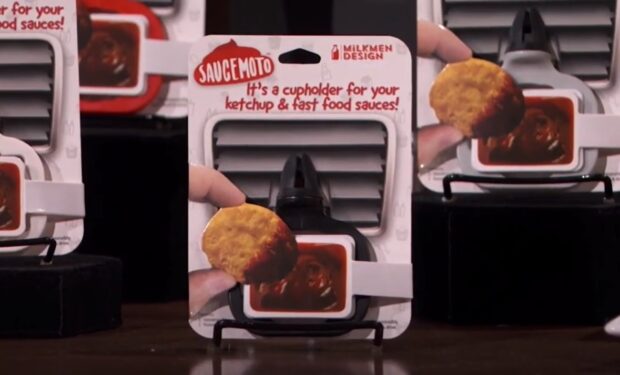 SauceMoto is a clip specifically designed to hold sauce containers and packets in a car. For those times when you drive through a fast food restaurant, order French fries or chicken fingers and realize how can I dip my fried chicken into that tiny little hot mustard sauce while driving?

The three men behind the novel car accessory (it clips onto an air vent slat) — Tony LaHood, William Moujaes, and Michael Koury of Milkmen Design — pitched SauceMoto on Season 10 of Shark Tank.

They went into the Tank seeking an investment of $45,000 in exchange for 15 percent equity. They accept an offer from Kevin “Mr. Wonderful” O’Leary: $45,000 for 25 percent, so the four of them are equal partners.

Since the Shark Tank episode originally aired in August 2019, Saucemoto continues to get 5-star reviews on Amazon, e.g. “This thing changed my life. I will never road-trip again with out this miracle of modern science.
I can now dunk with one hand and drive with the other. I have probably saved countless lives.”

A post shared by Saucemoto® by Milkmen Design (@saucemoto)