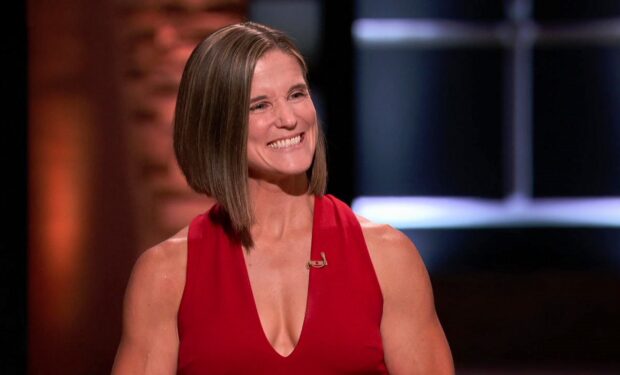 Sarah — who was also a women’s rugby All-American at Princeton! — is now selling FitFighter — the training program and Steelhose free weights — to trainers, coaches, gyms and the general public.

Wearing a stunning sleeveless red jumpsuit with a plunging neckline and cut-out back, Sarah is pitching FitFighter on Season 12 of Shark Tank. She goes into the Tank seeking an investment of $250,000 in exchange for 15 percent equity.

Cuban, O’Leary and Greiner invested in Cut Board Pro, a cutting board with a built-in cup to collect food remnants, which was the creation of late NYFD firefighter Keith Young.

And Lori Greiner, alone, has invested in a several firefighter-owned business including Firefighter Turnout Bags (fashionable bags made out of firefighter coats), Fire Avert (the kitchen stove fire prevention device), and The Paint Brush Cover (co-owner Sal DePaola is a Staten Island Firefighter).

Note: A portion of FitFighter sales goes to the Stephen Siller Tunnel to Tower Foundation which supports wounded warriors, fallen firefighters and their families.