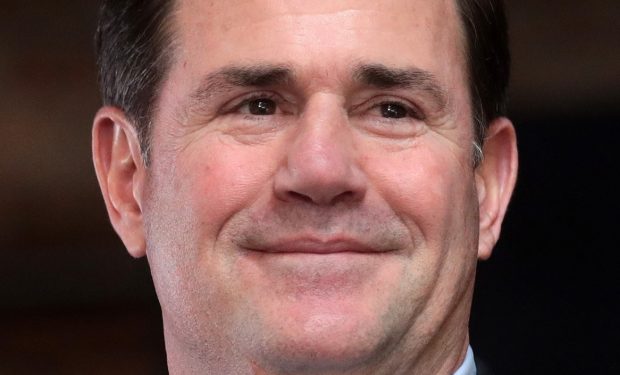 Before Doug Ducey was elected Governor of Arizona in 2014, the 56-year-old Arizona State University graduate was CEO of the ice cream parlor chain Cold Stone Creamery from 1995 to 2007, which was sold to Kahala Brands in 2007.

While CEO, Ducey purchased land in Paradise Valley, Arizona in 2005, and built a house there for him, his wife Angela (whom he met at ASU) and their three sons. In late 2019, the house was listed for sale at an asking price of $8.75 million.

According to the Arizona Republic, the 11,400-square-foot mansion (with six bedrooms and eight bathrooms) is a “gorgeous French style farmhouse” that sits along the Paradise Valley Country Club and has “unobstructed views of Mummy Mountain.”

Note: Ducey welcomed real estate guy and current US President Donald Trump to Arizona as seen in the photo and video above and below.

Ducey spokesman Patrick Ptak said as the governor’s kids are “leaving the nest,” the Duceys “decided it’s time to downsize.”

In February 2020, it was reported that the mansion sold for $8.15 million in cash and that the Ducey’s bought a relatively modest 3,100-square-foot home nearby for $1.375 million.