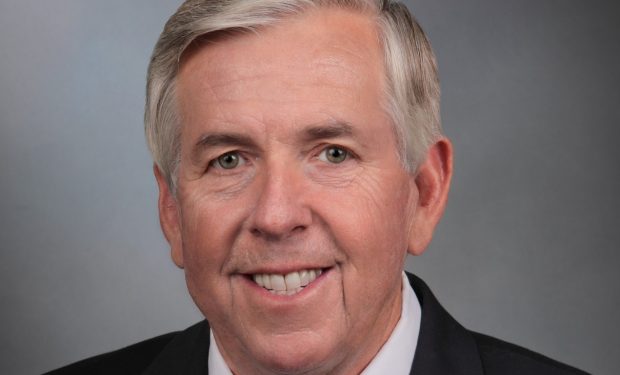 Mike Parson is the 57th Governor of Missouri (he was elected in 2018). The 64-year-old politician was a soldier in the U.S. Army for six years. He served two tours in the Military Police before serving 12 years as Polk County sheriff. Parson was elected to the Missouri House of Representatives in 2004.

Parson continues to own a cow and calf operation near Bolivar, where he lives with his wife, mother of his two grown children. They have six grandchildren including a recent graduate from Sparta High School.

On May 21, Parson shared the photos above from his granddaughter’s high school graduation, which he captioned, in part: “I challenge each graduate not to let COVID-19 define their future.”

The scene received significant blowback online, as commenters scolded Parson’s for not wearing a mask. While the graduates are sitting six-feet apart, the audience is not (swipe to see more photos), and nobody appears to be wearing a mask.

“Set an example. Put on a mask,” was one reply. “So much for social distancing” was another.

“I guess his rules only apply to others,” was yet another reply taking the governor to task. “I hope those kids and families are safe despite the lack of leadership here.”

One week after the graduation, Parson extended Phase 1 of the state’s re-opening plan from May 31 through June 15.

During Phase 1, “citizens may re-engage in economic and social activities but must adhere to social distancing requirements, including maintaining six feet of space between individuals in most cases.”