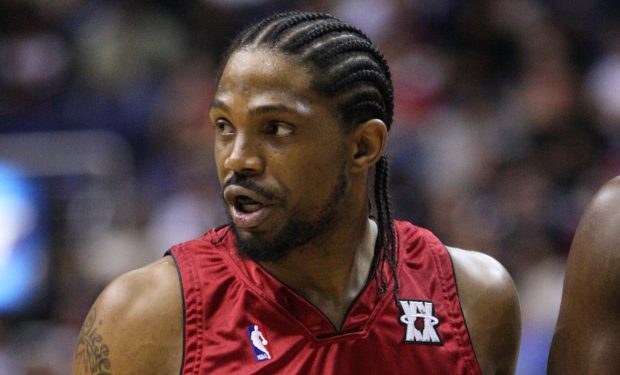 Since the NBA season is on hold, ESPN is re-airing NBA Hardwood Classics including the 2006 NBA Finals featuring the Miami Heat and the Dallas Mavericks. (Spoiler alert: Miami came back from 0-2 to win the series, thanks to stars Dwyane Wade, Shaq, and Udonis Haslem, among others.

Wade retired in 2019 but 39-year-old 3-time NBA champion Udonis is still playing and he’s still with the Heat.

When not on the court, Udonis spends time with his gorgeous wife Faith Rein Haslem, mother of his two sons, Josiah and Elijah. Check her out above, looking amazing and swinging on a stand up swing.

The athletic couple met at the University of Florida, where Faith was on the Gators track and field team. Check out her killer abs in the red hot string bikini pics above and below!