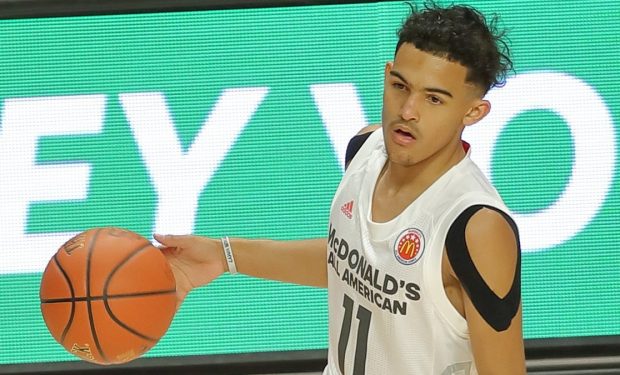 NBA basketball player and newly minted superstar Trae Young played college hoops for the Oklahoma Sooners before he was drafted by the Dallas Mavericks in the 2018 NBA Draft — and then traded to the Atlanta Hawks. As a Hawk, in February, the 6’2” point guard put up a career-high 49 points with 16 assists in a quadruple overtime loss to the Chicago Bulls (168-161). But that’s when he was just 20.

Young turned 21 in September and celebrated by wearing a Made in the 90s baseball cap and flaunting his killer 6-pack abs which are partially covered in a large script tattoo.

It’s from the Bible, 1 Corinthians 15:10: “But by the grace of God I am what I am, and his grace to me was not without effect. No, I worked harder than all of them—yet not I, but the grace of God that was with me.”

The Atlanta Hawks play the New York Knicks on Wednesday, October 16 at Madison Square Garden at 8 pm on ESPN.