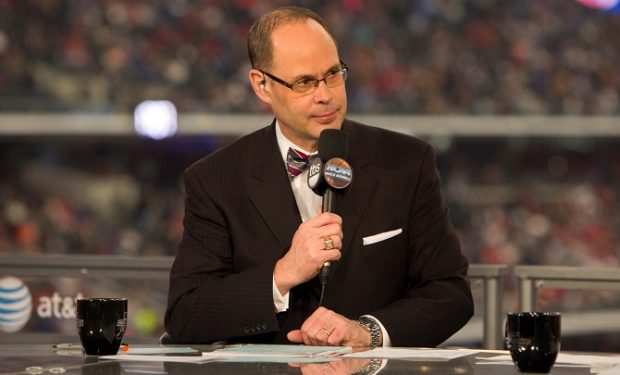 Ernie Johnson at the mic (TNT)

Shaq, Charles and Kenny all listened quietly — that rarity — as Ernie Johnson spoke movingly about a gift he received from cross-network rivals at ESPN. They sent his son an Emmy. A few years back the E:60 crew did a special on Johnson and his family. Johnson had recently battled cancer and won.

But the special show revealed aspects of his role as a father that few knew, including the fact that Johnson has a now 30-year-old son, Michael, who has Muscular Dystrophy and is on a ventilator. (Ernie and his wife adopted Michael from an orphanage in Romania — watch the show; it’s an astounding story.)

The ESPN show on Johnson, whose own father was a major league pitcher and all-star family man, won an Emmy. And in the emotional tribute below, Johnson shares that his son Michael — because of his part in the show — was also given an Emmy. He said his son thought it was “the coolest thing ever.”

.@TurnerSportsEJ wasn’t the only member of his family to receive an Emmy this week… 👏🏆 pic.twitter.com/SfJyGtR1JR