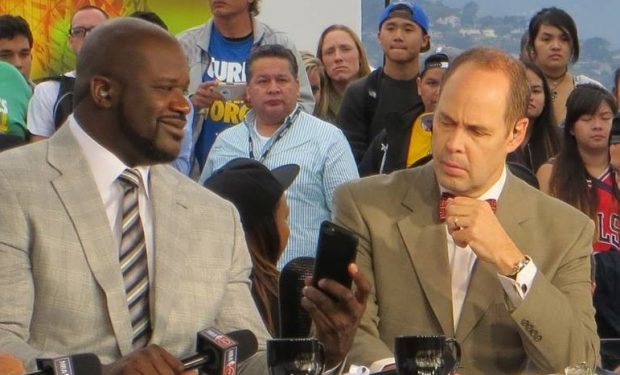 Shaq and Ernie talking things over (photo, cropped, by MavsFan28 via Wikimedia Commons)

Kenny “The Jet” Smith and Charles Barkley may have been more versatile NBA basketball players than their TNT studio colleague Shaquille O’Neal, but Shaq was more dominant than almost anybody who ever played the game. Still you might think a well-rounded forward like Barkley would be most in love with the beautiful basketball skill set of Denver Nuggets star Nikola Jokic, for whom a triple-double is an everyday stat. But it’s Shaq alone among the three former NBA stars who’s picking the Nuggets in their NBA playoff series against the determined and red hot Portland Trail Blazers. Maybe this shot below has something to do with Shaq’s pick?

Yup, that’s the reason? Shaq says simply that “Jokic is a joy to watch. Really really good.” Shaq continued: “It’s nice to see a big man play like this. I haven’t seen that in a while.” Asked by Smith if Jokic is a superstar, Shaq pronounced him a “baby superstar” — presumably with a lot of room to grow into a full size superstar since Shaq thinks he’s about to lead the Nuggets to the Western Conference Finals. TNT Master of Ceremonies Ernie Johnson also likes the Nuggets to win.

Who ya got between the Nuggets and Trail Blazers?

The Inside crew is split… pic.twitter.com/eeOvaipy7t