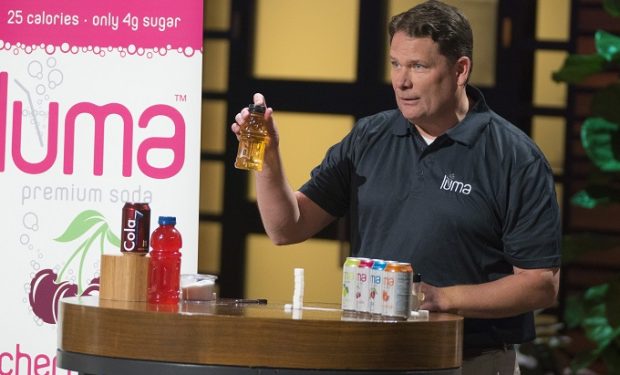 Luma Soda is a low-sugar soda being positioned as a healthier alternative to regular sodas and diet sodas that uses artificial sweeteners. Luma uses natural honey and monk fruit juice so each can contains just four (4) grams of sugar versus a 12 oz. can of Coke that contains 39 grams of sugar. There are currently four flavors available: blood orange, cherry cola, lemon lime and cola.

The inventor of Luma Soda, former trial lawyer Jim Otteson of Palo Alto, California, pitched his beverage business on Shark Tank on April 14 and in front of Beverage Guru guest Shark Rohan Oza. His 25 years of experience explaining things and persuading minds in the courtroom almost paid off. Barbara Corcoran really wanted to invest in this “great guy” Otteson, but neither Otteson nor Corcoran could persuade Oza to join the deal. That meant Corcoran wouldn’t do it alone, because she needed an Oza to make her deal work. “I totally adore you for being all in,” she said to Otteson, “but I mistrust your judgement.” Without Oza, Corcoran feared he wouldn’t have the coaching necessary to make it work.

Otteson sought an investment of $500,000 in exchange for 20 percent equity, but it wasn’t the asking price that hurt him. Oza balked because Otteson had already spent too much money for Oza’s liking. New episodes of Shark Tank air Sundays at 10 pm on ABC, right after American Idol. [27 Favorite ‘Shark Tank’ Products at Amazon — New List]