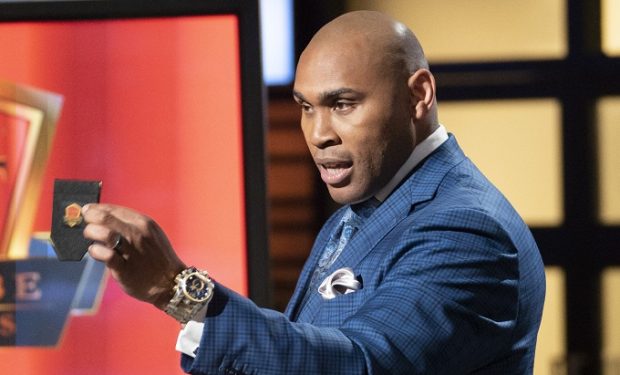 On Shark Tank, Cobbs has the good luck of pitching in front of the equally dapper clothing retail guru Daymond John. Plus, Robert Herjavec and Mark Cuban are also taking note of Cobb and his business pitch while wearing pocket squares.(Kevin “Mr. Wonderful” O’Leary is present also in a suit but sans pocket square.) Cobb goes into the Tank seeking an investment of $200,000 in exchange for 15 percent equity.

Total Tie Keep, which didn’t get a deal on Shark Tank in 2016 but did get former Shark Kevin Harrington to do a “As Seen on TV” infomercial for the brand;

Wurkin Stiffs (magnetic collar stays) which did get Daymond John to agree to a $100,000 investment but the deal later fell through; and

The Lapel Project (custom lapel covers) which made a $150,000 deal with Mark Cuban in exchange for 30 percent. Cuban has said it “is one of my all-time favorite deals.” John called the inventor Sebastian Garcia “the best salesman” he’s seen.

In the video below, Cedric Cobb talks about his influences including his AAU coach Heywood Hunt who “got eyeball to eyeball with me and basically said to me ‘I believe in you’. When he said it, I believed him.” Cobb adds, “He breathed life into me.”