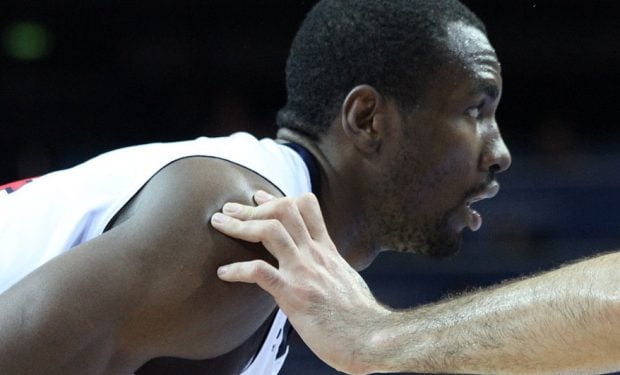 The NBA playoffs are the pinnacle for true hoop fans — the volume gets turned up and the highlights come fast and furious. The 7-game series format encourages narrative back-and-forth as in few other sports, helping build rivalries and reputations. (Hockey gets the same 7-game series juice; baseball’s 7-gamers are different because of pitching rotations; the NFL is one and done.)

And even though they play the NBA season from October to April, it’s during the two-month playoff period that reputations are built for posterity, for better or for worse. Sometimes new nicknames, built to suit the heightened moment, emerge to enhance the playoff intensity. (Either that or old nicknames take on refreshed meaning under the glare of the playoff lights.)

Here are three nicknames that are currently ringing true — or just plain entertaining fans — as the NBA playoffs start soaring.

1) Serge IBLOCKA: The dynamic leaper and defensive stopper Serge Ibaka, who has been a playoff staple since his days in OKC, cementing his nickname Serge IBLOCKA during the Toronto Raptors playoff run.

2) Russell Westbrick: On the flipside, sometimes a player gets a nickname they really don’t want. In this case Russell Westbrook‘s performance has him flirting with the unflattering Russell Westbrick for his less-than-MVP caliber shooting percentages. This one won’t stick, because Westbrook — the 2017 NBA MVP — is just too good a player and also because shooting alone doesn’t accurately describe his amazing impact on a basketball game.

And since Mitchell had 31 points including 19 in the 4th quarter of Game 4 against the Rockets, Albert had more than few opportunities to say his name — and Mitchell Donovan started to feel pretty natural. Besides, in Marv’s defense, Mitchell was doing some wildly athletic 180 degree stuff out there on the court — and he was mixing up more than just the announcer. Mitchell Donovan would be a good character for Space Jam 2 though, right? Hear that LeBron?

Mitchell Donovan is taking over the fourth quarter. pic.twitter.com/DJDviLBahW