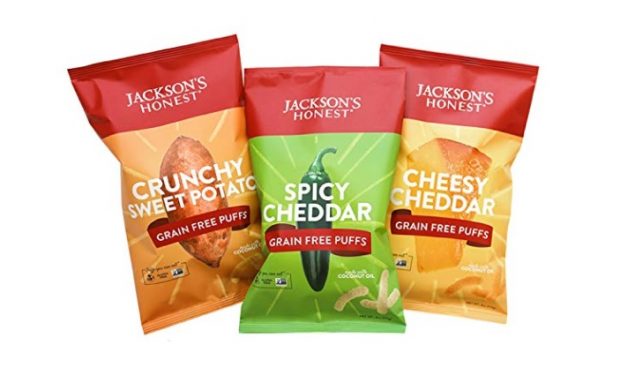 Jackson’s Honest is a line of potato and tortilla chips made with organic coconut oil. The creators of Jackson’s Honest, Scott Reamer and Megan Reamer of Crested Butte, Colorado, made the snack for their son Jackson “who was diagnosed with a rare variant of Aicardi-Goutieres Syndrome.”

The chips are perfect for low-inflammation diets like Jackson’s. The Reamers pitched their snack food business on Shark Tank in October 2017. They went into the Tank seeking an investment of $1.25 million in exchange for five percent equity. They left with a deal with guest Shark Rohan Oza — $1.25 million for 15 percent.

[Jackson’s Honest chips are on sale at Amazon]

After Shark Tank, Scott Reamer said of Oza: “He has already helped inform so many parts of the business, from strategy, packaging, R&D, to financing, marketing and branding.”

The packaging got a makeover and rolled out its biggest new product launch for Jackson’s Honest since the company was founded in 2012 — Grain Free Puffs. The puffs are made without rice, corn or vegetable oil and are available in cheesy cheddar, crunchy sweet potato and spicy cheddar. New episodes of Shark Tank air Sundays at 9 pm on ABC.

*Note: Sadly, Jackson Reamer died suddenly on August 13, 2017; he was 16. “His legacy will live on in the company his struggle founded,” said his father. “And that’s as strong a salve as can be applied to our absolutely broken hearts.”