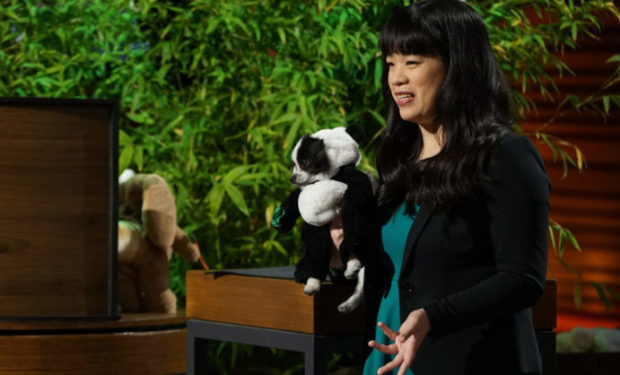 Pandaloon is a company that makes adorable animal costumes for dogs. The most famous is the panda bear costume. A video of a puppy running while wearing a Pandaloon panda bear costume went viral because it’s so cute and hilarious at the same time. The entrepreneur behind Pandaloon, Eugenia Chen of Burbank, California, pitched her business on Shark Tank in January 2018. She went into the Tank seeking an investment of $60,000 in exchange for 20 percent equity in Pandaloon. She made a deal with Daymond John — $60,000 for 35 percent; John said he would donate 10 percent to animal charities.

[Pandaloons are on sale at Amazon]

Since Shark Tank, Chen continues to promote Pandaloon online (see Amazon link above) and at trade shows. Most recently she brought her cute squad of models to SuperZoo in Vegas. See photo below. [Related: 27 Favorite Shark Tank Products — New List]

The cutest #superzoo squad ever! These lil Pandaloon friends were stopping hearts in Las Vegas at Superzoo like nobody’s business. ? Thank you to @gusgusinthecity , @hi_im_chewie and @lemonpom for visiting our booth and spreading the walking teddy bear love! As a small business, we are always so grateful for the love and support to our dear IG friends. ❤❤❤ (Special thanks to @orkyeh for modeling our unicorn and polar bear costumes too!)