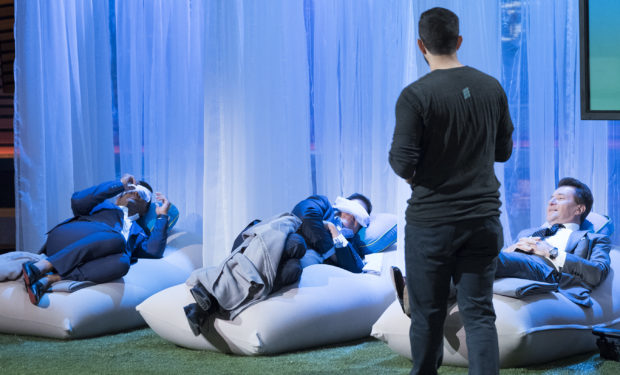 Recharj is a napping pod studio in Washington, D.C. that encourages people to take and get the most out of a nap. The entrepreneur behind Recharj, Daniel Turissini of Arlington, Virginia, is pitching his business on Shark Tank on January 7. During his presentation, he convinces three male Sharks — guest shark Rohan Oza, billionaire Mark Cuban (who’s known to enjoy a power nap), and Robert Herjavec — to give the Recharj a try. Eyemasks included. Note: It was during the Napwell pitch on Shark Tank when Cuban said, “I’ve never had a bad power nap.” And Daymond John, who says he gets about four hours of sleep each night, wrote in February, “I don’t sleep enough.” (See below.)

Naps are known to help improve productivity and to help reduce anxiety. Who doesn’t need that? Recharj customer Sarah Robertson told her local NBC news station (video below) that  the first time she tried it (with her colleagues), they left “giddy” as if “we just had three cups of coffee.” See video below. A 25-minute session at Recharj is all you need and it costs just $15. New episodes of Shark Tank (Season 9) air Sundays at 9pm and 10pm on ABC. [Related: 27 Favorite Shark Tank Products]

“I don’t sleep enough. But I’ve never met someone successful who says ‘I wish I slept more’.” @robertherjavec #SharkQuote