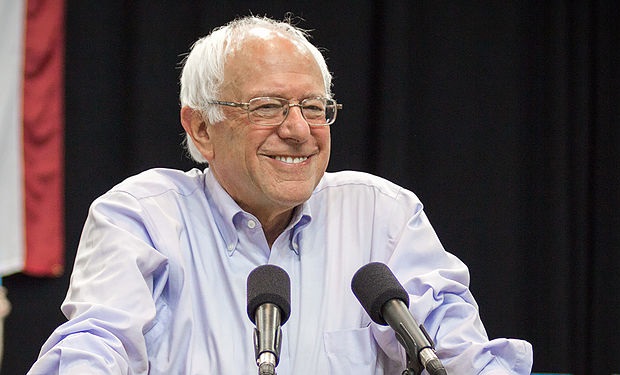 Bernie Sanders has seemed more emboldened than defeated by the election of Donald Trump. Touring to support his book,  Our Revolution: A Future to Believe In, Sanders book events turn into political rallies as the energetic populist takes Trump’s election as fuel for his progressive fire. Sanders believes his solutions are better for the country — and specifically for many people who voted for Trump. Where Trump promises jobs, Sanders vows to make sure that jobs actually pay — battling for a livable minimum wage, healthcare and other core family needs.

Sanders joined striking federal contract workers in DC this week, applauding their efforts to win a $15 minimum wage. Last week Sanders declared two victories — on the Dakota Access Pipeline and TPP. Next week he’ll speak at Kenosha, Wisconsin — Sanders won the Wisconsin primary — and appear at the United Auto Workers headquarters there. As Donald Trump travels the country on his “Thank You” tour, appearing at large rallies, Sanders is on what seems like a shadow tour. It’s interesting to consider that Sanders, proven a big draw like Trump, could occupy a sort of “Shadow President” role after a divided election that saw the Democratic candidate win the popular vote over the President-elect. If Sanders supporters have their way, the Vermont senator’s ideals and ideas will lurk behind each of Trump’s initiatives — whispering what could have been and what still might be.