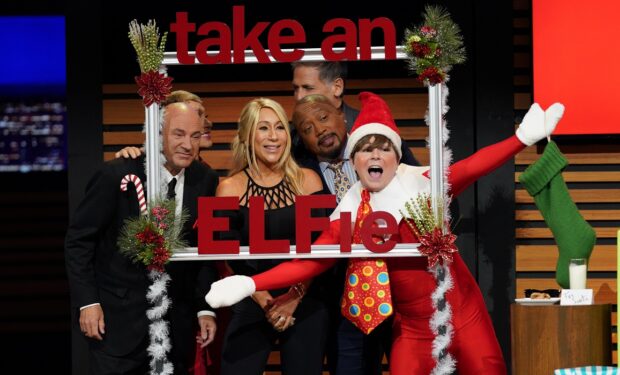 On Season 13 of Shark Tank, Tommy Holl of Chicago, Illinois hopes to spread joy through his personalized digital business, The Real Elf. The self-proclaimed “Head of Public Relations for the North Pole’s Midwest Division of Holiday Cheer” has the good fortune of pitching in front of Mark Cuban, Barbara Corcoran, Kevin O’Leary, Lori Greiner, and Daymond John, all of whom gather to take an “Elfie” with Tommy the Real Elf.

All of the Sharks have invested in holiday-related products over the years but it’s Barbara Corcoran who invested $200,000 in Hire Santa, a database-driven company that helps people hire Santa Claus during the holiday season. But don’t count out Kevin O’Leary: Hire Santa turned down his $200,000 offer for Barbara’s!

When Hire Santa recently shared the photos of Barbara above, they captioned it: “Santa spent time with @barbaracorcoran today and has determined she belongs on the nice list!” Barbara replied: “I’ve been waiting all year for this moment!”