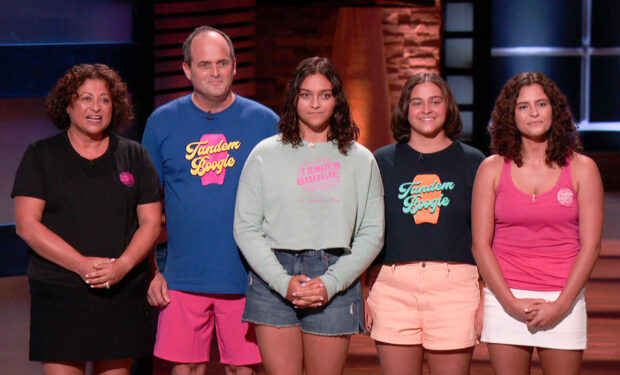 On Season 12 of Shark Tank, married couple John and Manya Clark and their three daughters pitch their water sport product Tandem Boogie. It’s an inflatable bodyboard built for two people to ride at once. Dual action pump and maintenance kit included. The Clarks went into the Tank seeking an investment of $100,000 in exchange for ten percent equity.

The Clarks had the good fortune of pitching in front of Robert Herjavec (see above), who has a good track record of investing in “alternative” sports companies including the long skateboard company Hamboards (Shark Tank, Season 5).

The Clarks accept a deal with Robert and guest Shark Daniel Lubetzky of Kind Bars: $100,000 for 35 percent.

After the Tandem Boogies Shark Tank episode originally aired in March 2021, the company has rebranded itself as TANDM Surf and has launched an inflatable tandem surfboard –see above.