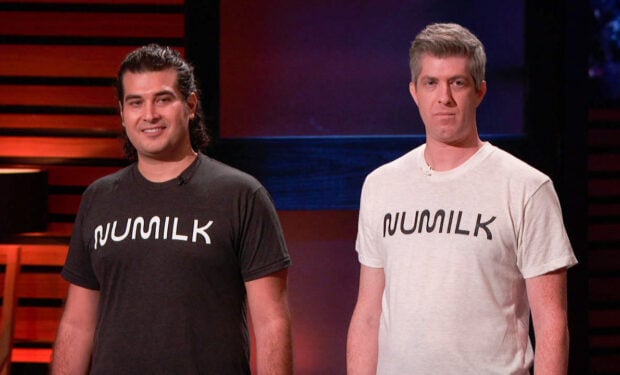 On Season 12 of Shark Tank, Joe Savino and Ari Tolwin of New York City pitched their “udder-ly” unique vegan drink, NUMILK. The fresh plant-based milk is delivered via the Numilk machine (see below), which can fill a bottle in under a minute. It’s an eco-friendly alternative to pre-packaged milk cartons.

Joe and Ari had the good fortune of pitching in front of billionaire vegetarian Mark Cuban who has invested in several vegan products/business on Shark Tank. They went into the Tank seeking an investment of $1 million in exchange for five percent equity.

Cuban offered a $2 million investment: $1 million for 7 percent equity, the other million as a loan at 3 percent interest, and Cuban wanted 3 percent of stock as advisory shares or straight up equity.” Cuban clarified that if Numilk doesn’t use the loan, they don’t have to give him the additional 3 percent. If that’s the case, Numilk could use all $2 million in exchange for 10 percent equity.

Since the episode originally aired in March 2021, Numilk reports that it plans to build out the commercial side of the business by developing partnerships with coffee shops and grocery stores across the U.S. and one day scale internationally.