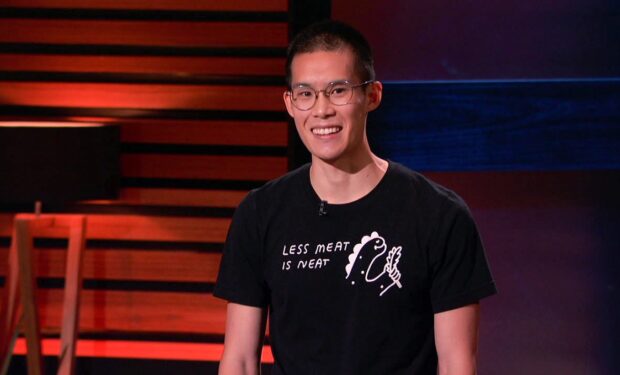 On Season 12 of Shark Tank, New York City entrepreneur Phil Wong pitched his company Misfit Foods, a line of sausages made half of vegetables and the other half of humanely-raised chicken or beef. He went into the Tank seeking an investment of $250,000 in exchange for five perfect equity.

Phil had the good fortune of pitching in front of vegetarian billionaire Mark Cuban — who has invested in several vegetarian food brands including Wanna Date (date spreads) and Mrs. Goldfarb’s Unreal Corned Beef (vegetarian corned beef) — and KIND Snacks founder and CEO Daniel Lubetzky, who knows what it takes to sell healthy food.

Phil accepted an offer from both Mark and Daniel: $300,000 for 15 percent equity. And he’s staying humble by delivering the goods in Brooklyn (see photo below).

Since the Misfit Foods Shark Tank episode originally aired in March 2021, the veggie chicken sausages continue to get 5-star reviews online. One customer wrote: “I love sweet potato and this was a super easy addition to a weekend sheet pan breakfast hash. Nice to get a little more flavor in a way that doesn’t feel sooo heavy.”