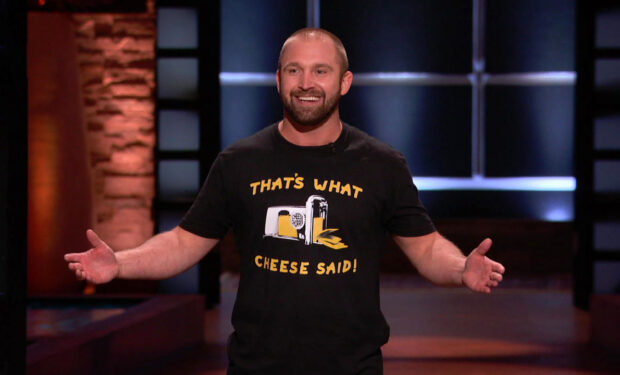 Tate Koenig of The Cheese Chopper on Shark Tank (ABC)

On Season 12 of Shark Tank, entrepreneur Tate Koenig from Aurora, Oregon, tries to get the “cheddar” as he shares an easy way to cut cheese with his all-in-one product, The Cheese Chopper. It’s promoted as “a revolutionary new way to slice, shred, and store your cheese with ease.”

Is there a demand for such a device? You betcha! More than 2,000 backers pledged $100,436 on Kickstarter to help bring The Cheese Chopper to life.

Tate has the good fortune of pitching in front of Mark Cuban, Kevin O’Leary and Lori Greiner: all three Sharks offered to invest ($500,000) in the baked cheese snack company Just the Cheese (although founder David Scharfman declined all three offers).

O’Leary also invested in Wicked Good Cupcakes which has partnered up with Hickory Farms to deliver gift boxes with cheese and goodies.

But don’t count Lori out — it looks like The Cheese Chopper is made for QVC TV! She’s had great success selling kitchen accessories and storing units including Kitchen Safe containers.