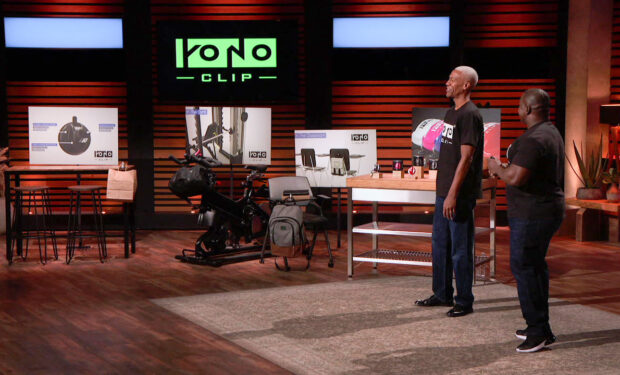 On Season 12 of Shark Tank, two entrepreneurs from Atlanta, Georgia, Michael Green and Bob Mackey, pitch their Yono Clip. It’s a simple product — a clip you just “press, pull and hang” — to keep your belongings (bags and jackets) off the floors of public places. It’s a long list of places including gyms, restaurants, airports, and others that are known to be full of germs and dirt.

Michael and Bob’s high energy is undeniable and (ironically) contagious. After Michael does his signature hip-shaking Yono dance, all five of the Sharks stand up and do it, including billionaire Mark Cuban, who proves he’s got moves!

As seen in the video above, Daymond John looks and sounds sold on the product as he chimes in on their tagline “Germs and Dirt!”

P.S. The Yoko Clip founders are seeking an investment of $150,000 in exchange for 15 percent equity.