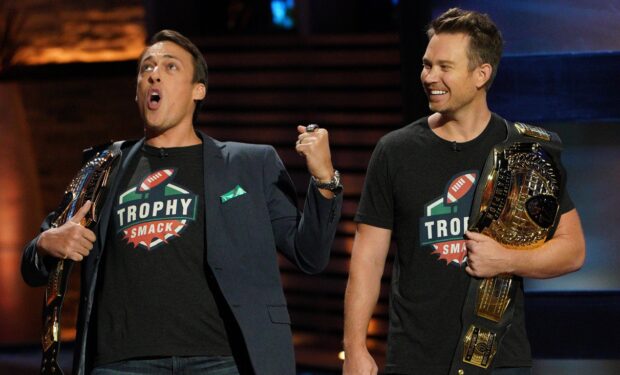 Trophy Smack is a business that sells customizable fantasy football trophies, championship belts, and other blingy accessories so you can talk (and flaunt) smack with friends and family. The two fun-loving guys behind Trophy Smack, Matt Walsh and Dax Holt, pitch their novelty business on Season 12 of Shark Tank.

The elaborate regal chair is made of sports balls and sticks and bats and helmets. And well, look at the pics above and below. Cuban looks pretty pleased with his new position.

When not on Shark Tank, Cuban keeps his 2011 NBA Championship trophy close as seen in the recent TV interview below.

Mark Cuban doing interviews with the 2011 championship trophy is a big mood pic.twitter.com/dRPSM0LfDq