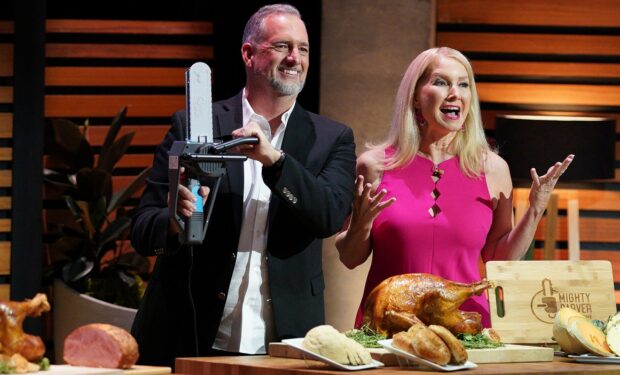 On Season 12 of Shark Tank, husband and wife Lance and Kim Burney from Sanford, Florida, present an entertaining approach to the tried-and-true carving knives often used during holidays. The Mighty Carver is an electric carving knife that looks, sounds and feels like a chainsaw. Not only is it fun to use but it works really well too. The Might Carver is getting 5-star reviews at Amazon.

On Shark Tank, everyone has Thanksgiving turkey on their mind but the MightyCarver can also cut pineapple, cantaloupe, bagels and loaves of bread, among other hard to cut food.

The Burneys come into the Tank seeking an investment of $100,000 in exchange for 20 percent equity and get billionaire (and new vegetarian) Mark Cuban to try the product while wearing a white goalie mask ala the Halloween slasher film.