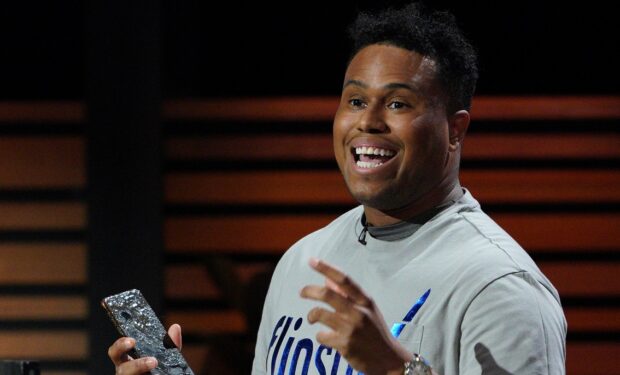 On Season 12 of Shark Tank, entrepreneur Akeem Shannon from St. Louis, Missouri makes a dramatic entrance. He walks into the Tank wearing a space costume, sticks his phone against a glass window and launches into a rap. He describes his product, Flipstik, as “a kickstand on demand” and with it “gravity is under your command.” And he promises to “deliver ROI on your 100 grand.”

Flipstik is a paper-thin device that lets you prop your phone up on the move. It can stick to almost any surface — glass, tile, vinyl, marble, leather, wood, etc. (You remove your phone by giving it a little twist.)

In the Tank, Akeem seeks an investment of $100,000 in exchange for 20 percent equity. Not many phone-related products have landed deals on Shark Tank — although Daymond John did invest in SoundBenders, a magnetic sound amplifier that clips on iPads, and Mark Cuban (with Robert Herjavec who’s not on this episode) invested $500k in PolarPro, the company known for snap-on filters for GoPros and drones.

Check out rapper Snoop Dogg at the AT&T panel event above touting Akeem as a “branding genius.” He even got Shark Tank shaved into the back of his head for his audition! See below.