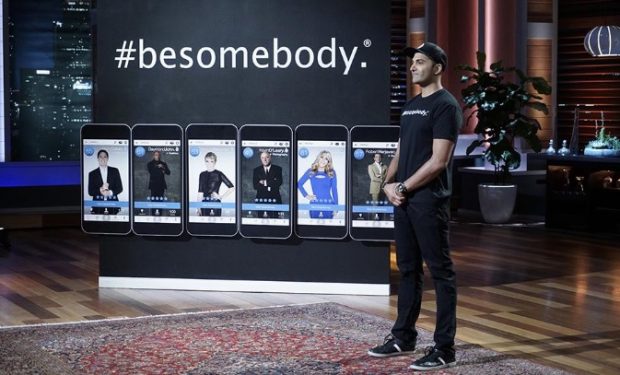 Besomebody is an app designed “to facilitate experiential learning by booking live experiences with mentors and experts in various activities.” It’s supposed to connect people who are passionate and interested in learning the same things. The founder of #besomebody, Kash Shaikh of Austin, Texas, pitched his business on Shark Tank in November 2016. He went into the Tank seeking an investment of $1 million in exchange for 10 percent equity. The former Procter & Gamble marketing executive launched his pitch aggressively by saying, “I call every one of you out!” which did not work well on the Sharks. Shaikh did not leave the Tank with a deal.

After Shark Tank, Besomebody pivoted its focus and in February 2017 sold its experience marketplace app to Utivity Holdings, Inc., a Denver-based company which offered similar services but (as of March 2019) no longer has an online presence.

In September 2018, Shaikh announced on the besomebody Facebook page that the company was focusing on helping businesses. While Shaikh reassured his 705,000 followers that “our purpose will always stay the same: Help People Live Their Passion”, besomebody will now also help “the world’s best companies” from the moment they hire, to the culture they create. See video below.

In February 2019, besomebody announced that it acquired Pixelbug Technologies so it can add AI capabilities for its recruiting and training business. Besomebody candidates must pass screenings including AI-driven assessments and evaluations. New episodes of Shark Tank air Sundays at 10 pm on ABC, right after American Idol. [Related: #BeSomebody on Shark Tank Mocked By High School Students]