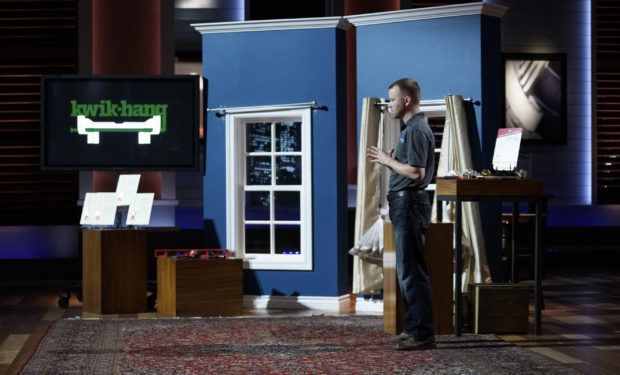 Kwik Hang is a curtain rod bracket that does not require drilling holes into walls. You just tap the Kwik Hang bracket with with a hammer on on top of a window molding (instead of the wall) and then hang the curtains in seconds. The entrepreneur behind Kwik Hang, police officer Derrek Burr from North Attleborough, Massachusetts, pitched the home improvement product (invented by his late father Tom Burr) on Shark Tank in October 2017 but, alas, did not get a deal.

[An alternative is magnet hooks with 3M stickers]

Burr is one of many Shark Tank alum who are trying to get Amazon to crack down on counterfeit products. Despite the patents he holds on Kwik Hang, according to Burr, there are at least “522 unique sellers” selling counterfeit versions of his product. On a more positive note: in April 2018, Burr announced that Kwik Hang would be available in select Ace Hardware stores. New episodes of Shark Tank air Sundays at 9pm on ABC.