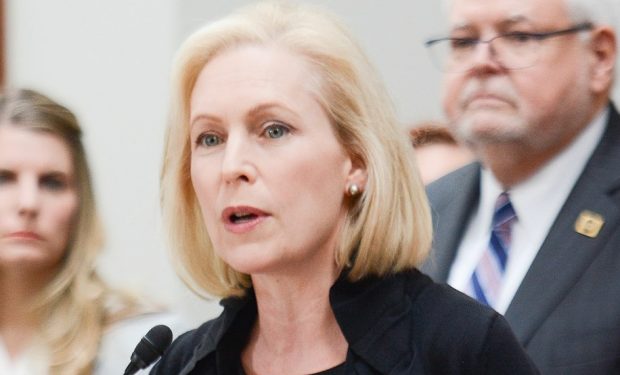 Senator Kirsten Gillibrand confounds her critics, and that may be a very good thing for her political brand. Political opposition tactics — especially those of Donald Trump — usually attack with a sledgehammer. That means broad characterizations that lack nuance but hit hard — “Crooked Hillary”, “Pocahontas”, “Lyin’ Ted Cruz” being examples of the approach.

But famously sometimes a situation requires a scalpel instead of a sledgehammer — and Gillibrand may be a target not so easily sledgehammered. The National Review tries calling Gillibrand “chameleonic,” which doesn’t quite have the stickiness of “Crooked Hillary.” It’s meant as an insult, of course, implying that like a chameleon Gillibrand easily changes colors to adapt to her immediate environment. Such adaptability is portrayed by Gillibrand’s foes as the opposite of consistency. But as Emerson, that most American advocate for Self-Reliance, reminds us: “a foolish consistency is the hobgoblin of little minds.”

What gets excoriated as political “flip-flopping” may also be seen as a maturation of views as the world changes and as a constituency’s priorities change. (See: gay marriage, marijuana legislation, etc.) One result is that The National Review, in trying to chop down Gillibrand, doesn’t quite know where to aim its ax. They take apart her privileged background, while also saying — as they must given their readership — that there’s “nothing inherently wrong” with a privileged background. (Did you hear? The president grew up in somewhat cushy circumstances, as did the last two Republican presidents before him, both named Bush.) But citing Gillibrand’s “dramatic flip-flops on issues like guns and illegal immigration when she moved from the House to the Senate” the critics try to wield the sledgehammer, whereas an effective Gillibrand critique may require a scalpel instead.

So-called “flip-flopping” is a tricky criticism to wield, since the variability it aims at makes the broad characterizations of sledgehammer style more difficult to pull off. Trump hasn’t shown — or yet been required to show — an ability to use the scalpel all that well. He’s a hammer guy. Bringing down Gillibrand may require the GOP to use a different set of tools, which makes her an attractive option for Democrats.

Still The National Review keeps trying the hammer, looking to knock Gillibrand with comparisons to a Marvel Comics villain called “Super-Adaptoid“ (just “Adaptoid” in early Marvel versions). It’s another acknowledgment of the senator’s adaptability — but is adaptability a problem or a solution in a rapidly changing world? That’s a question voters will ponder. It’s worth noting that Gillibrand’s enemies are already paranoid about her skills, success and political dexterity. Otherwise they wouldn’t be hauling out the Marvel superhero metaphors quite so early in the race. It’s no accident, for instance, that in Marvel Universe “Super-Adaptoid” is always trying to kill Captain America.