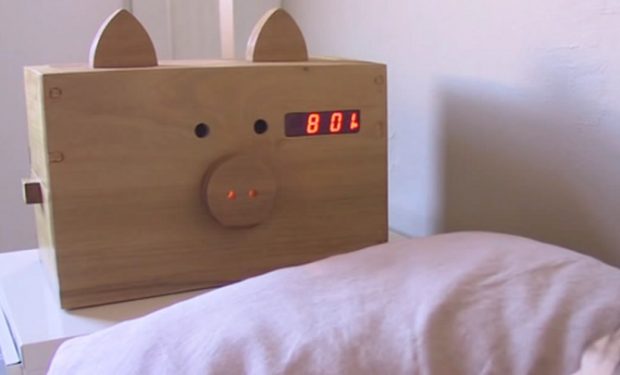 Wake n’ Bacon was a unique product — an alarm clock that wakes you up with the smell of fresh bacon. To set the Wake n’ Bacon alarm clock meant putting a strip of pre-cooked bacon in the pig-faced oven before going to bed. Ten minutes before you’re set to wake up, the clock would start reheating the bacon and the smell would wake you up. In March 2011, the inventor of Wake n’ Bacon, Matty Sallin, pitched the product on Shark Tank and asked for a $400,000 investment. Alas, he didn’t get a deal and the product is no longer available seven years later. However, the good news is there are other bacon-themed alarm clocks available like the one below. Granted, they don’t cook bacon but maybe that’s a good thing.

[The Walkin Shakin Bacon Alarm Clock is $25 on Amazon]

P.S. Matty Sallin, who has his Master’s degree in Interactive Design from New York University, is now Head of Design & Experience at Stealth Genetics in San Francisco. New episodes of Shark Tank (Season 10, 2018) air Sundays at 9 pm on ABC.