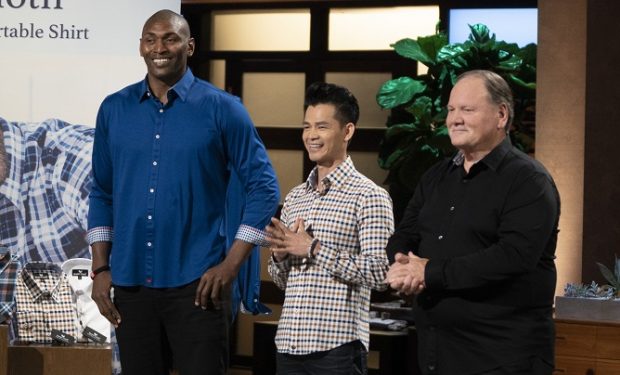 Former NBA basketball star Metta World Peace stands 6’7″ tall — 6’8″ by some accounts. The ferocious defensive standout making a guest appearance on Shark Tank played his college basketball in New York at St. John’s, and then spent more than a decade as a productive contributor in the NBA, most memorably with the Indiana Pacers and the Los Angeles Lakers, where he won an NBA title in 2010. Not yet 40 years old, Mr. World Peace has already had more lives than the proverbial cat, and continues to reinvent himself all the time: Metta used to go by his given name, Ron Artest. In China, where he played basketball post-NBA (and where he is enormously popular), he is known as Panda Friend (or The Pandas Friend). Metta has his own clothing line based around the Pandas Friend moniker. (See link below.)

Metta appears on Shark Tank as an investor in Butter Cloth, the innovative clothing company known for its buttery-soft dress shirts for men. He helps the founder of Butter Cloth, designer Dahn Tran, pitch his business on Shark Tank and in front of guest Shark, NBA legend Charles Barkley, in addition to the regular Sharks lineup. Tran says Metta is the brand ambassador to the sports and entertainment world. Metta had a memorable turn recently as the most beloved houseguest on Big Brother: Celebrity Edition. Unusually for the show, Metta exhibited almost no defensiveness, particularly strange for a one-time NBA Defensive Player of the Year!