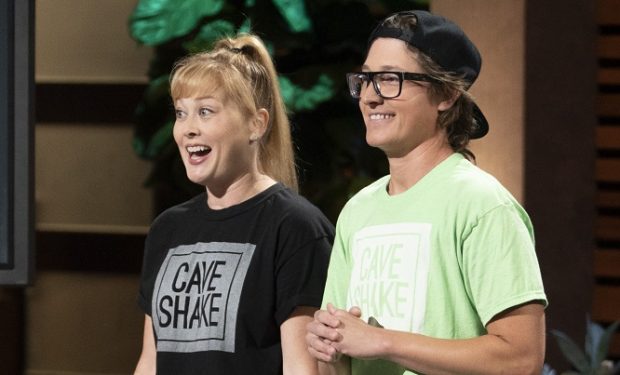 Cave Shake is a line of dairy-free, gluten-free, low carb, ready-to-drink coconut milk shake. It’s the perfect snack (meal replacement or dessert) for anyone on a keto diet — they taste like melted ice cream — and come in vanilla, chocolate and coffee flavors. The founders of Cave Shake, Holly Heath and Billie Cavallaro from Los Angeles, are pitching Cave Shake on Shark Tank (October 28). They go into the Tank seeking an investment of $250,000 in exchange for 10 percent equity — and do a little song and dance to, well, shake things up.

[Cave Shake is on sale at Amazon]

When not selling Cave Shake, Billie Jo Cavallaro is likely making music, movies or both. The video artist often partners with singer/songwriter and electric violinist Bitch who was featured in John Cameron Mitchell’s film Shortbus. Cavallaro and Bitch produced the album and documentary film Thunder and Lighten-ing about Canadian folk singer Ferron. Cavallaro and Bitch raised more than their goal of $48,000 via a Kickstarter campaign to release BEACH (see video below). New episodes of Shark Tank (Season 10, Fall 2018) air Sundays at 9 pm on ABC.