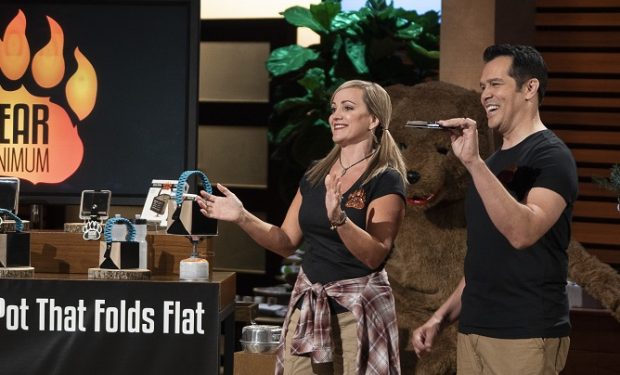 On the Season 10 premiere of Shark Tank, Bear Minimum pitches its camping cookware company. Heidi Santiago and her “brilliant” husband Cory Santiago from Spokane, Washington, have created the Bear Bowl, a cook pot that folds flat. It’s made of food grade flame resistant material which is safe to use over flame camp stoves (not open flames!), and it comes in three different sizes. The Santiagos go into the Tank seeking an investment of $100,000 in exchange for 20 percent equity of Bear Minimum. They have the good fortune of presenting in front of Daymond John who is an avid outdoorsman. Could he be the Shark they’re looking for, one who isn’t afraid of bears?

Bear Minimum is selling a Family Pack (one of each size) for $99.

The idea for Bear Bowl came to Cory when he was a child playing “Pick” with his brother. Cory explains, “We each got five items to choose to bring to the deserted destination. I am always interested in survival gear and kits. Most of the time my ideas get invented before I create them, but nobody had a good solution to the cooking pot.” New episodes of Shark Tank air Sundays at 10pm on ABC.