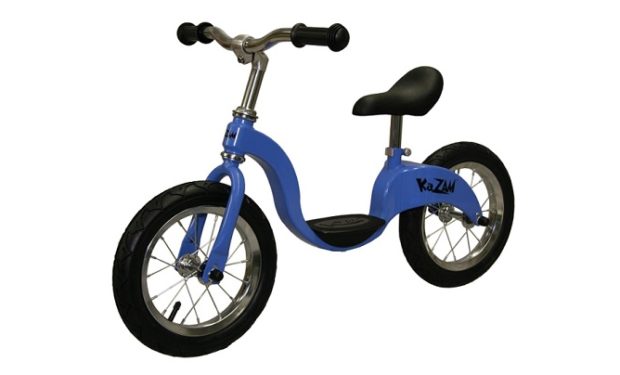 KaZam is the company that makes balance bicycles to help kids learn how to ride without training wheels. Rather than pedal, kids put their feet on a footrest and glide on the bike. The entrepreneur behind KaZam, Mary Beth Lugo, pitched her business on Shark Tank in May 2013. She went into the Tank seeking an investment of $300,000 in exchange for 20 percent equity. Lugo accepted several offers including one from Kevin “Mr. Wonderful” O’Leary who called Lugo a witch when she accepted an offer — $300,000 for 32 percent — from Mark Cuban and Barbara Corcoran.

Since Shark Tank, KaZam has launched Ride-On, a miniature balance bike designed for kids as young as 12 months old! The KaZam Ride-On is available in blue, pink and white, and for $65. The company is also selling its own Shortboard featuring cubed Shark Wheels, a company that also made a Shark Tank deal with Mark Cuban, O’Leary, and guest Shark Nick Woodman of GoPro. KaZam’s Shortboard is available in blue and red, for $60. [Related: 27 Favorite ‘Shark Tank’ Products at Amazon — New List]