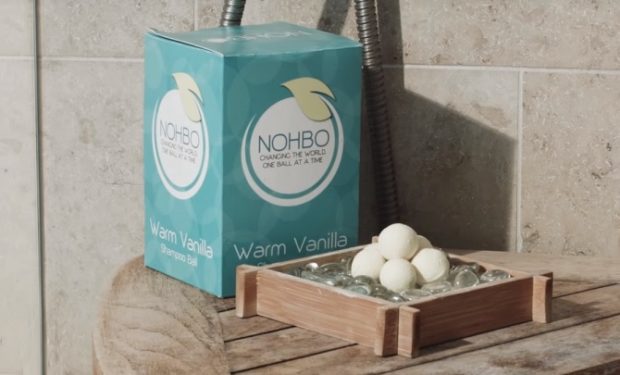 Nohbo Ball is a ball of shampoo wrapped in plant-based material so it eliminates the need for a plastic bottle. The ball is activated by water or friction. The brilliant eco-friendly invention belongs to young entrepreneur Benjamin Stern of Melbourne, Florida. His big idea is to have Nohbo Balls replace every little plastic bottle of shampoo, conditioner and body wash in hotels around the world. (4 out of 5 people don’t recycle bathroom bottles.) The high school student (and his grandmother) pitched Nohbo Ball on Shark Tank in February 2016. Stern made a deal with billionaire Mark Cuban — $100,000 for 25 percent equity.

Since Shark Tank, Stern graduated from Viera High School (class of 2017) and launched a successful Indiegogo campaign, which was fully funded in just three days and exceeded the goal by 200% ($27,131). There were some complications when the first line of Nohbo Balls were delivered “due to structural instability.” Stern fixed the problem by wrapped the balls in water soluble films and transforming them “into a gel format from a solid dehydrated form.” It not only worked but also reduced the cost of making the balls by over a third. Stern says Nohbo Balls now called Nohbo Drops are easier and faster to scale. According to the Nohbo website, Nohbo Drops will be ready Spring 2018. To receive early bird notifications, leave your name and email to get on the list.