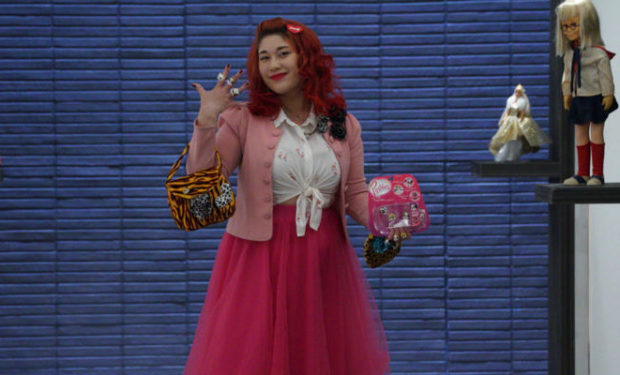 Blythe Schulte of Poshies on The Toy Box (ABC/Richard Cartwright)

Two animal-themed toy inventions are competing against each other on the November 12 episode of The Toy Box. First up is Corky’s Porkys, a board game involving a collection of barnyard animals. The inventor of Corky’s Porkys, Colt Sampson, wears his favorite white 12-gallon hat. The other toy is Poshies, a line of animal-inspired accessories. The inventor of Poshies is pink-haired Blythe Schulte. Word must be out that the kid judges respond well to headgear fashion.

When Blythe isn’t working on Poshies, she’s either acting or singing. The lyric soprano has performed with Broadway legend Carol Channing (Hello, Dolly!) and mentored with Metropolitan Opera star, Diane Elias. Blythe is currently a student at the prestigious Berklee College of Music in Boston. In September, Blythe released her debut album Synesthetic (see link above) which includes covers of Alicia Keys “If I Ain’t Got You” and Pharrell’s “Happy” and Gershwin’s “S’Wonderful,” among others. The Toy Box airs Sundays at 7pm on ABC, right before America’s Funniest Home Videos. [related: The Toy Box: 7 Finalists, 1 Winner Made By Mattel, Sold at Toys R Us]