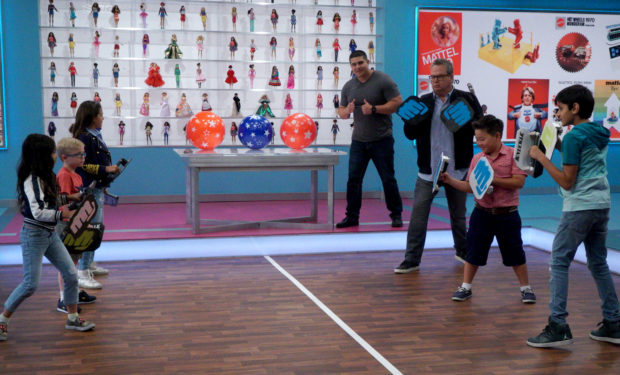 Joe Castillo is the inventor of Knuckle Racket. It’s a game that involves two stringed rackets but instead of swinging the rackets like in racquetball or tennis, you punch the ball with the rackets. It’s like a racquetball version of boxing. (It has the same rules as racquetball and you can use the game on an indoor or outdoor racquetball court.) The Knuckle -Rackets fit on your hands sort of the way snow shoes fit on your feet. Castillo is presenting his toy in front of the kid judges on The Toy Box on Sunday, November 12.

[Mattel made Artsplash, winner of The Toy Box, Season 1]

There are three different versions of Knuckle Racket: the original, the new Weighted Knuckle Rackets for a serious shoulders and arms workout, and Knuckle Racket for Kids. The kid version uses a lightweight racket and a bigger ball and the rules are more similar to tennis. All you have to do is draw a line on the ground with chalk. Kids just have to hit the ball over the line. If your opponent misses the ball, you get a point. And don’t let it bounce twice on your side!Of course, with a cool toy like Knuckle Racket, kids will no doubt invent games with their own rules too. To pre-order the Kids Knuckle Racket, send Jose an email on his website. The Toy Box airs Sundays at 7pm on ABC, right before America’s Funniest Home Videos.